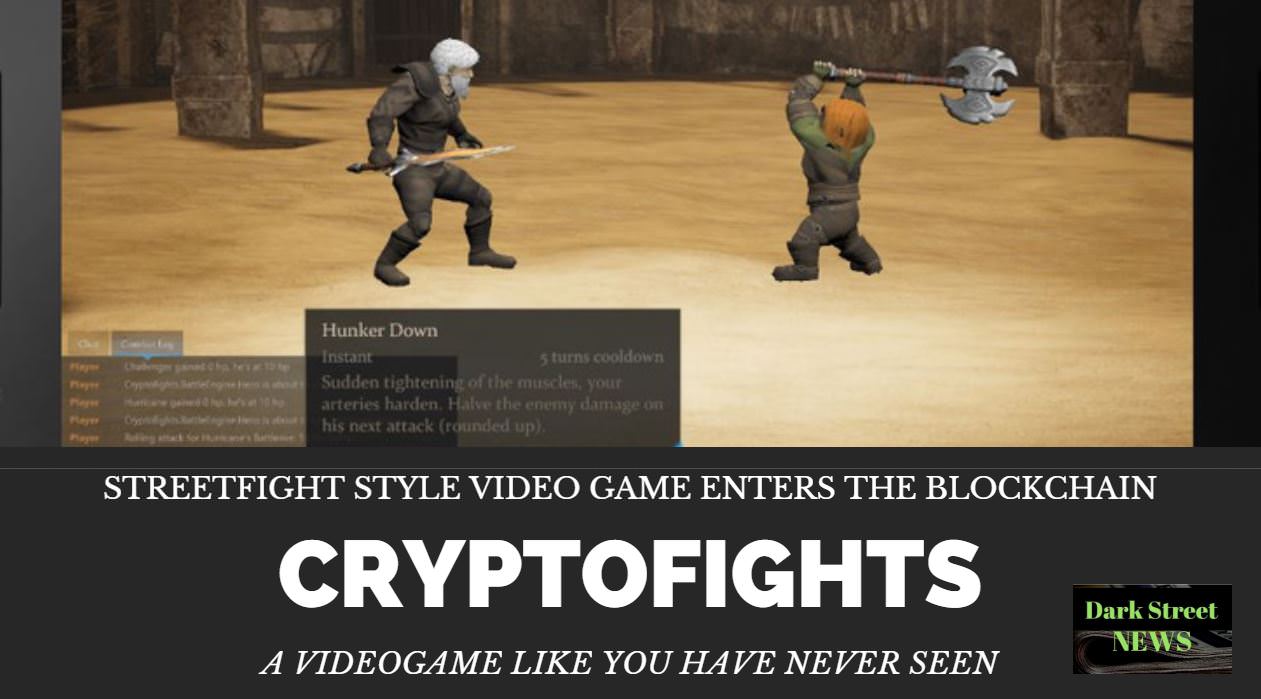 There are many Crypto Projects out there that never actually take form.  They are simply a bunch of promises on white papers that never actually take shape.  What is great is when you run into a project that has both a cool idea and an already working application.  Cryptofights is a really cool idea, it has some unique innovations and even better it appears to be ready to go.

CRYPTOFIGHTS is a video game that runs fighting style game like Mortal Kombat or Street Fighter.  The difference being that with the results of this game, the items and rewards earned are all stored on a blockchain.  To make this happen the CryptoFights team utilisized a sidechain of Ethereum to avoid some of the delays that are inherient in a decentralized system.

Another unique development is the use of the Enjin token that can be stored in items earned, those items can be melted away and the holders of them can instead recieve an amount of Enjin Tokens that were stored in the items.  This is a unique way of buying and using tokens. It gives the tokens a use case in the game, and also the ability to be distrubuted once their use initial use was complete.

The Darkstreet bloggers have been exploring the Cryptofights world and really enjoy this project, you should give it a look as well.


You can find the website for CryptoFights at:  https://cryptofights.io/

You can find information on their presale at:  https://presale.cryptofights.io


Thoughts in Motion’s CryptoFights is an upcoming mobile crypto game that utilizes EnjinCoin’s Ethereum based ERC1155 technology to offer in-game items that are backed with the ENJ coin and utilize P2P trading just like any other ERC20 or ERC721 token.


Morrisville, North Carolina, September 12, 2018, Thoughts in Motion, a well-known gaming studio, sent shockwaves through the world of gaming with their pending Pre-Sale and roll-out of a truly game-changing Blockchain based gaming platform. The way gamers view gaming platforms has forever been changed thanks to this innovative game studio. CryptoFights is one of the first gaming platforms to join the MultiVerse, where gamers can cross onto other gaming platforms and take with them their avatars, fighters and weapons.


CryptoFights, the end-to-end blockchain role-playing fighting game will adopt Enjin Coin’s platform to create in-game items using the next-generation ERC-1155 token standard. During a recent interview, a company spokesperson explained: “Featuring serverless gameplay, CryptoFights uses a sidechain to enable high performance gaming while securing game assets on the Ethereum mainchain. It can be described as a turn-based Street Fighter, with interchangeable weapons and armor providing a real-time strategic advantage to players who outmatch their opponents.”


He goes on to say: “Fighting a match is heavily based on dice rolls to introduce some element of luck and randomness to both players. New players start as a low-level fighter and must win matches to earn XP and gold. XP can then be used to level up their fighter making them stronger with more ability points to allocate. In-game Gold can be used to buy new weapons and armor from the marketplace to give your fighter the edge it needs. As your fighter levels up you will enter new arenas to battle, getting you higher level rewards.”


On the CryptoFights platform, all game items will be owned by the player on the Ethereum Blockchain. Through the use of Smart Contracts on the blockchain, centralization is avoided. It is owned by nobody…..yet owned by everybody who is a stake-holder. There can be no cheating or stealing. Items can be bought by obtaining in-game gold. Gold is obtained by winning matches and receiving “loot rewards”, or by purchasing gold packs directly. Using the Enjin Wallet, users can manage and store their items for viewing and trading. They can then buy, sell, or trade with anyone over the internet, and accept other items to trade, cryptocurrency, or cash. All items will have a “melt” value attached to them which allows players to turn items into ENJ. This sets a floor price on all items.

CryptoFights’ features are what sets it above all other such games:


Mark the calendar for September 19, as that is when the CryptoFights Pre-Sale begins. The initial weapons and armor that will be minted will be of the Genesis Series and will be in limited quantities and never be available again, thus insuring that its value appreciates. Both Private and Institutional Investors have expressed a lot of interest in this project. Early adopters will gain the most by taking advantage of the Pre-Sale Discounts. Imagine being part of the future of gaming.

Important Disclaimer: Dark Street does not endorse any financial vehicle or investment. Opinions expressed on Dark Street are those of the writers and not of Dark Street. The information provided in Dark Street including but not limited to; articles, notes, webinars and accompanying material is for informational purposes only. It should not be considered legal or financial advice. You should consult with an attorney or other professional to determine what may be best for your individual needs. Dark Street does not make any guarantee or other promise as to any results that may be obtained from using our content. No one should make any investment decision without first consulting his or her own financial advisor and conducting his or her own research and due diligence. To the maximum extent permitted by law, Dark Street disclaims any and all liability in the event any information, commentary, analysis, opinions, advice and/or recommendations prove to be inaccurate, incomplete or unreliable, or result in any investment or other losses. Content contained on or made available through the website is not intended to and does not constitute legal advice or investment advice and no attorney-client relationship is formed. Your use of the information on the website or materials linked from the Web is at your own risk.
Labels: crypto CryptoFights Enjin