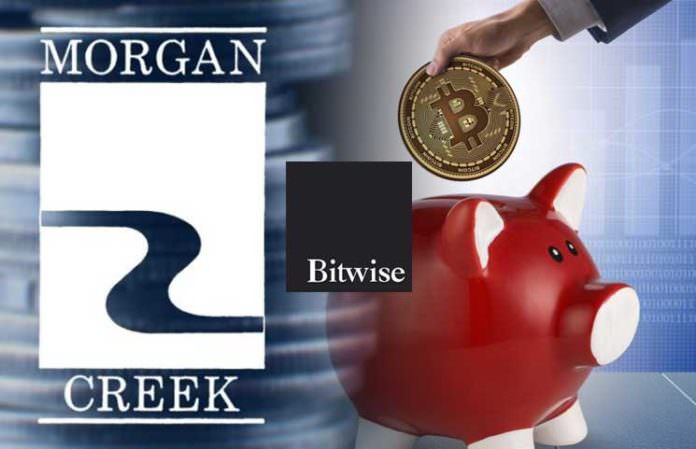 Morgan Creek is coming out with an index fund that will track to a new cryptocurrency index called the Morgan Creek Bitwise Digital Asset Index (MCBDAI). The Index fund will be for institutional investors and have a minimum investment requirement of $50,000.

This was reported out in an interview with CNBC:
Morgan Creek Rolls out Cryptocurrency Fund - CNBC


Morgan Creek teamed up with Crypto Index specialist Bitwise which has also created the HOLD 10 Private Index designed to track the top 10. Bitwise's indexes differ from the other ETF's seeking SEC approval due to the fact they cover a wider ranger of cryptocurrency than just Bitcoin.
A question often heard in the cryptocurrency is whether there is demand for mainstream investment vehicles to invest in the cryptocurrency space.  According Morgan Creek the answer seems to be a resounding yes.

Morgan Creek's Chief Investment Officer Mark Yusko was said by CNBC that he felt that endowments, pension funds and family offices were increasingly looking at Cryptocurrency assets.   The article did cite some skepticism that Pension funds like that of Harvard and Stanford would be willing to risk their assets after Bitcoin lost 50% of its value this year.  There were also worries cited over the risks of storing Cryptocurrency however, Mark Yusko was cited as saying that Cold Storage technology coming out would begin to alleviate those concerns.

Hold 10 ETF was reported out of Coindesk.
https://www.coindesk.com/bitwise-proposes-etf-for-top-10-cryptos/

Which currencies are included and which not? NO RIPPLE
At this time we know of the following currencies that are listed on the funds official website.  This will change based off market caps and the rules of the Index.Bitcoin, Bitcoin Cash, EOS, Litecoin, Zcash, Monero, DASH, Ethereum, and Omisego.  You will note that list does not include some of the major crypto currencies ranked by market cap. One curious aspect of this is which currencies will not be included. In an article with Forbes the Morgan Creek digital partner Anthony Pompilano said that some currencies that have a central partner that owns 30% more of the supply then they will be withheld of the index.

“If there’s a central party that owns 30% or more of supply then we withhold those from the index, [b]ecause we think that introduces a lot of additional risk that may not be there if it was a more decentralized network.”


Pompilano's comment would seem to indicate that cryptocurrencies of Ripple, Stellar though likely meeting market cap requirements would fail to be in the index. Also likely excluded currencies would include TRON (TRX), NEO, and NEM. These currencies had a proportion of their tokens allocated to the founders / developers prior to the token sale to make them public.

Another strike against Ripple and Ethereum came from the government regulator Gary Gensler who argued that those cryptos could be considered unregistered securities based off of their presales.  This rule did not seem to effect Ethereum as it is said to be included in the Morgan Creek fund.

This is an interesting requirement and it will be interesting to see if new currencies like bitcoinR / XBR will attempt to customize their launch in such a way as to maintain their eligibility in ETFs.  Without XRP/Ripple in an ETF, bitcoinR would be the only cryptocurrency in the regulated space eligible to be in an ETF if it met the requirements.  Darkstreet will not be able to research this in full until the currency launches.  This will be an interesting thing to follow as this is a new variable in the market.


Important Disclaimer: Dark Street does not endorse any financial vehicle or investment. Opinions expressed on Dark Street are those of the writers and not of Dark Street. The information provided in Dark Street including but not limited to; articles, notes, webinars and accompanying material is for informational purposes only. It should not be considered legal or financial advice. You should consult with an attorney or other professional to determine what may be best for your individual needs. Dark Street does not make any guarantee or other promise as to any results that may be obtained from using our content. No one should make any investment decision without first consulting his or her own financial advisor and conducting his or her own research and due diligence. To the maximum extent permitted by law, Dark Street disclaims any and all liability in the event any information, commentary, analysis, opinions, advice and/or recommendations prove to be inaccurate, incomplete or unreliable, or result in any investment or other losses. Content contained on or made available through the website is not intended to and does not constitute legal advice or investment advice and no attorney-client relationship is formed. Your use of the information on the website or materials linked from the Web is at your own risk.
Labels: Bitwise Cryptoindex Darkstreet index Morgan Creek