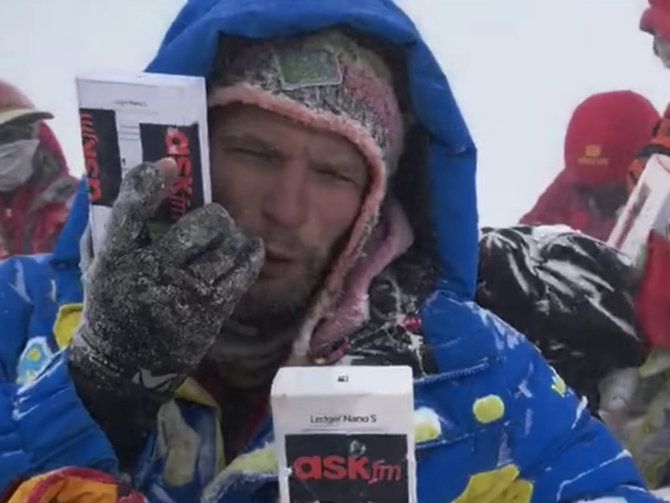 A new altcoin called ASKfm decided to promote the idea of going to the moon by sending a team of to the top of mount Everest with Nano Ledger Wallets containing large amounts of the ASKfm currency.  In total a wallet with 500k of ASKfm was buried on top of the summit of Everest.

The initial press release from ASKfm was very positive about the experience saying.  They explain the thinking of the promotion as:


In an unconventional way to launch the token sale, ASKfm builds their communication upon the idea of an ascending trend. That’s a pun, of course, but also a leadership claim. While others try sophisticated marketing techniques, these guys went out there and put themselves right on top of the highest mountain on the planet. An elegant way to boast ideological superiority to every other crypto. A way quite strangely unexplored before. Even memes-wise, think about the closest starting point to reach the moon. It seems so obvious, yet no one has done it.

The press release mentions some challenges but does not mention other problems.  The most negative mentioning the challenges of the teams descent.


Of course, there were issues. While descending, two of the guys were stuck at above 7,000 metres with no reserve oxygen for the entire period and were unable to continue due to the extreme weather and health conditions. Air rescue responded on the second day, they’re both safe and currently receiving treatment.

However, as many people know climbing mountains, any mountain is dangerous.  This is also of true of course of Mt Everest.  There are more dangerous mountains but the world's highest mountain is still very dangerous especially for a marketing promotional stunt.

Facts have come out that the team indeed experience far more tragedy during the promotion than was initially reported in the initial press release.  One of the climbers on the ASKfm suffered from frost bite on his fingers and toes and even more tragic one of the Sherpas that was working for the team did not return to base camp and is assumed to be dead.

The team reportedly ran into bad weather at the summit and were forced to go down quickly.  This is not unusual for climbing Everest the top section of Everest is called the deadzone for a reason.  As the team descended two of the Sherpa guides lagged behind the group.  One of the Sherpas that was lagging named Lam Babu never made it back.  One of the climbers from the ASKfm team Dmitry Semerenko was critical of the Sherapas saying in an article Outside Online that,  “We could tell by the look [of] them that they were inexperienced, and had to clarify if they [had] ever been to Everest before. They barely understood English and basically were porter Sherpas.”  Dispite this critism the same Outside Online article points out that Lam Babu was an experienced climber who had summited Everest 3 times and multiple other 8,000 meter peaks:


Lam Babu was no rookie in the Himalaya, however. He summited Everest three times and has ascents of Cho Oyu, Manaslu, and Annapurna, all 8000 meter peaks.

In a Coinnuts post by the Bitcoinist the author makes the point of saying no one is to blame for the dead and that these mountain climbs are inherently dangerous.  Many of the mountaineering posts are critical of ASKfm for using a mountain as a stunt.  They are also critical of ASKfm seemingly glossing over the disapearance of the sherpa.  The Coinuts article and the Outside Online article also point out that the team did stop on their descent to help out a Chinese climber named Saber Liu who was on the mountain alone and did not have oxygen.  Some of the posts definitely had hints of disdain at the overall crypto market.

What do I think?
My opinion is between that of the more critical posts and the posts in their defense.  Climbing mountains is complicated and dangerous and tragic events like this do occur.  However, as a Coloradan I have seen many people come to our (Much smaller mountains) and treat them like Disneyland rides, they are not and they deserve far more respect.  Is treating mountains like gimmicks really good for a brand?  For all of the promotion on this I still have no idea what sets ASKfm apart from other cryptocurrencys beyond the fact they like to take risks.  I'm not going to fully condemn them, but I also would not recommend this type of marketing in the future.

ASKfm Promo Videos from the event:


Support the Dark Street Project
Dark Street is committed to educating the masses about Bitcoin and other cryptocurrency technology.  You can help us get out the word.
You can support us by sending us through Crypto using QR codes below!

Important Disclaimer: Dark Street does not endorse any financial vehicle or investment. Opinions expressed on Dark Street are those of the writers and not of Dark Street. The information provided in Dark Street including but not limited to; articles, notes, webinars and accompanying material is for informational purposes only. It should not be considered legal or financial advice. You should consult with an attorney or other professional to determine what may be best for your individual needs. Dark Street does not make any guarantee or other promise as to any results that may be obtained from using our content. No one should make any investment decision without first consulting his or her own financial advisor and conducting his or her own research and due diligence. To the maximum extent permitted by law, Dark Street disclaims any and all liability in the event any information, commentary, analysis, opinions, advice and/or recommendations prove to be inaccurate, incomplete or unreliable, or result in any investment or other losses. Content contained on or made available through the website is not intended to and does not constitute legal advice or investment advice and no attorney-client relationship is formed. Your use of the information on the website or materials linked from the Web is at your own risk.
Labels: ASKfm ASKfm Promotion Crypto Marketing cryptocurrencynews cyptocurrency Everest Marketing Tragedy