Tyler Winklevoss calls out Bill Gates - Put your Money where your mouth is.

Tyler Winklevoss strikes a hard counter at establishment billionaires and their critiques of Bitcoin and other cryptocurrencies.  If you really believe what you say then prove it.


Dear @BillGates there is an easy way to short bitcoin. You can short #XBT, the @CBOE Bitcoin (USD) Futures contract, and put your money where your mouth is! cc @CNBC @WarrenBuffett https://t.co/4JIhF5vWsZ
— Tyler Winklevoss (@tylerwinklevoss) May 7, 2018


A variety of billionaire including Charlie Munger and now Bill Gates have come out against Bitcoin.

If you think they are stupid.....Then short them.

Winklevoss makes a strong point though, talk is cheap lets see action.  Personally I believe they would never do this with their own money.   If they have used any time researching it they would know they are going against tidal wave.  But hey I could be wrong.

Shorting any asset is risky.  While going long on an asset an investors losses are limited to the purchase price of an asset, the potential losses of shorting are unlimited.  Shorting an asset like Bitcoin that has a deflationary limited supply attributes is even more dangerous.  If any of the bullish projections pointing toward a price per bitcoin of a million dollars per were to come out while an investor shorted the losses would be staggering.  However, Bill Gates could afford this risk.

As Tyler Winklevoss explains the market and instruments that can be used for Bitcoin continue to expand each day and yes you can now short Bitcoins.  There are future contracts in XBT on the Chicago Board Trade in which you can take a short position just like other assets.  This process is thus similar to shorting pork bellies or crude oil.

Do I recommend shorting Bitcoin........heck no.

I was reading Charlie Munger's critiques yesterday.  For the record I love Charlie and have actually spent multiple months analyzing Warren Buffet's Annual Letters just to glean out tidbits from Warren and Charlie.  There is actually a book now that put the letters together called "The Essays of Warren Buffet" by Lawrence Cunningham.  I would highly recommend it.  (Yes I know Charlie Munger and Warren Buffet are not the same person).

So I am by no means a Charlie hater.  Also I am not a person that advocates putting all of your money into cryptocurrency.  I do think though that critiques like Charlie's yesterday go way too far and are based on some failed assumptions.

Charlie begins like most great debaters and many other crypto haters and gives Bitcoin a complement.  This is to give the impression that he has researched and is being fair minded.   Charlie tells  Yahoo Finance that:

“The computer science behind bitcoin is a great triumph of the human mind.  They created a product that’s hard to create more of [But] ”

His complement Bitcoin is a techy computer whiz bang gadget is often something people say who don't really understand it.  It is the canary in the coal mine I look for when valuing someone's critique.

After Charlie's but he reveals his true opinion:   "I see an artificial speculative medium, It’s anti-social, stupid and immoral.”

I want to say first off that anyone who wants to invest in anything at all should read, listen and study Charlie Munger and his pal Warren Buffet.  Certainly, when they make comments about cryptocurrency you should be there and listening if that is a space you are listening in.  However, in this case I really found his critique hyperbolic and wanting.

Some thoughts on Bitcoin Critiques
Alright I have a problem with some Bitcoin Critiques.  Its not that they are being critical of it, its that their critique reveals their ignorance.  I like critism if it makes me ponder and think but Charlie's did not rise to that level for me.

The first thing I would say is that Bitcoin is more than a gadety tech thing.  Bitcoin is less a technological achievement as it is an achievement in philosophy that technology simply made possible.  Tech gadgets come and ago but philosophies like other ideas are virulent, powerful, and immortal.

Bitcoin is less a technology than it is an idea.

In the words of Victor Hugo (Sorry if you find this tangential but I love this line):

"An Invasion of armies can be resisted, but not an idea whose time has come."

Here I will even post a sexy picture of it: 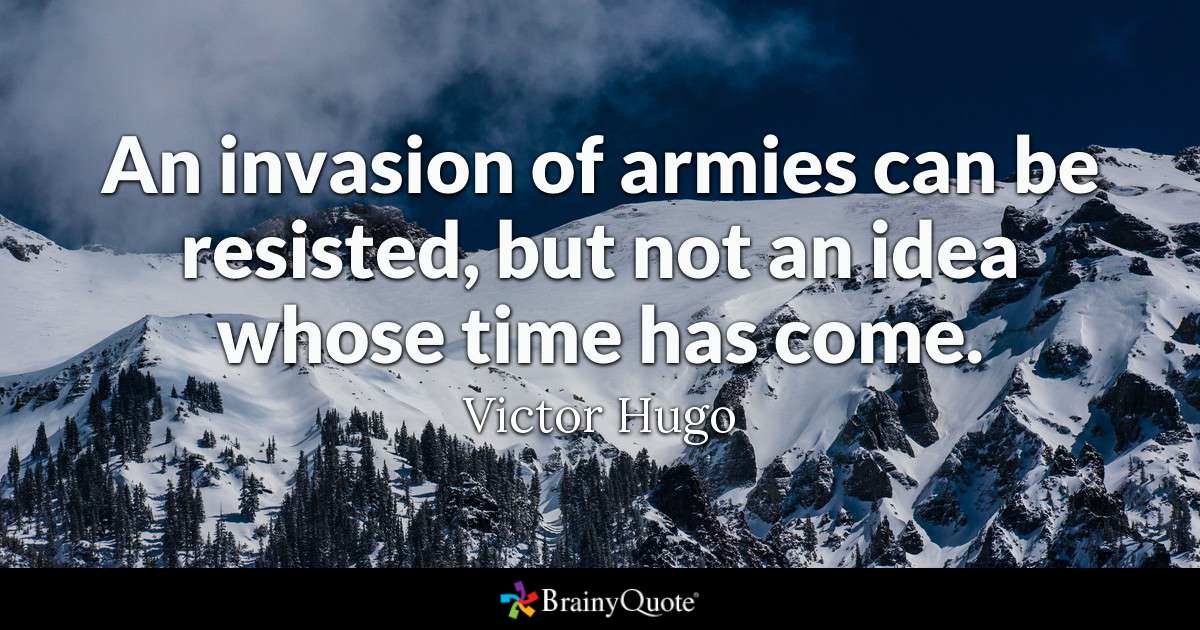 A Quick Tangential note to my already tangential note --- While Victor Hugo was an ardent monarchist initially toward the end of his life he became a stronger supporter of the ideas of Republicanism in which the people hold sovereignty through representatives in a republic.  He would certainly be on the list of great minds of the past I would love to talk about cryptocurrency with.  Doc Brown get that time machine working already!


Arianna Simpson made the point that both Warren and Charile are not strong tech investors.


I’m not sure why folks are so concerned what Warren Buffet says about crypto. He and Charlie Munger have openly admitted being terrible tech investors for a very long time... (cont)
— Arianna Simpson (@AriannaSimpson) May 6, 2018

This is true.  The sad thing about it is that Bitcoin is explained as a tech thing, and that limits it (At least for now).

I would argue that Bitcoin is less a technology and more of an idea that has been around for a long, long time fermenting in the minds and works of classical liberals.  Economic and philosophical heavy weights like Murray Rothbard, Ludwig Von Mises, Frederick Hayeck and certainly the Objectivist philosophy of Ayn Rand.  I would even argue that roots of the idea of Bitcoin itself goes back to the American Revolutionary war and America's freedom minded forefathers.  I could go on, talk about the links to Enlightment thinkers, Ciscero and even Plato.   That is a little extreme for my purpose with this post.  (But I Could do it -- Just dare Me!)

Bitcoin is an evolution of thought on freedom, what does it mean to be free, and how can people be more free.  Why should we the people trust our wealth to governments when we can be better stewards of it ourselves.

Bitcoin has flaws, but until you understand what it actuall is your critiques will fall flat because its apparent you do not understand what you are dealing with.  Once more what I get out of critiques like Charlie is the immense amount of room for cryptocurrency to grow once it is explained not by techy geeks, but by artists, poets, historians and writers.  That is when the idea of Bitcoin will really take off, and contrary to Charlie and Bill I do not believe that revolution has even started yet.

My advice to them though is to look at it through the lens of an idea before you short it.  That is when you go down the rabbit hole and begin to see things through the looking glass.


Important Disclaimer: Dark Street does not endorse any financial vehicle or investment. Opinions expressed on Dark Street are those of the writers and not of Dark Street. The information provided in Dark Street including but not limited to; articles, notes, webinars and accompanying material is for informational purposes only. It should not be considered legal or financial advice. You should consult with an attorney or other professional to determine what may be best for your individual needs. Dark Street does not make any guarantee or other promise as to any results that may be obtained from using our content. No one should make any investment decision without first consulting his or her own financial advisor and conducting his or her own research and due diligence. To the maximum extent permitted by law, Dark Street disclaims any and all liability in the event any information, commentary, analysis, opinions, advice and/or recommendations prove to be inaccurate, incomplete or unreliable, or result in any investment or other losses. Content contained on or made available through the website is not intended to and does not constitute legal advice or investment advice and no attorney-client relationship is formed. Your use of the information on the website or materials linked from the Web is at your own risk.
Labels: #BillGates #Bitcoin #cryptocurrency #darkstreetnews #Winklevoss Bill Gates Charlie Munger Warren Buffet